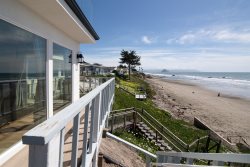 The Central Coast of California has a Mediterranean climate - warm and dry in the summer and cooler and wetter in the winter. Within this broad general trend, however, California Central Coast weather varies quite a bit according to how close you are to the ocean.

Coastal areas have moderate temperatures all year round and are thus a safe bet for outdoor activities any time of year. Summer can be foggy along the coast (but a lot less foggy than San Francisco). Fall is actually the warmest along the coast, with average daily highs in the low 70s. Winter daily highs along the coast are still very moderate, usually in the low 60s. San Luis Obispo (eight miles from the coast) weather is normally a bit warmer than the coast by 5-10 degrees and only gets occasional fog. The inland valleys (i.e. Paso Robles and Los Olivos) are hot in the summer and early fall (average highs in 90s or 100s), but nicely moderate the rest of the year (although winter mornings can be frosty). The entire region is virtually rainless from May to October. November to April is the rainy season, but even during the rainy season, we get long stretches of beautiful clear weather.

Bottom line - the Central Coast is a great year round destination, from a California weather perspective. Come enjoy it for yourself!

Jump to a Rental